Diabetes surveillance aims to provide prompt, periodic reporting on findings related to the consensus-based indicators. Wherever possible, data on the indicators is disaggregated by sex, age, region and education. Various data sources are used to do so. 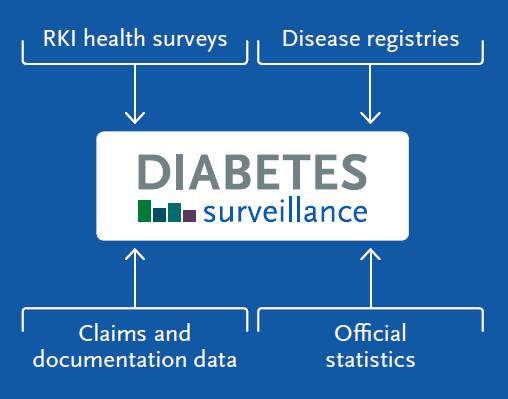 These data sources can be divided into the following groups:

The population-representative RKI health surveys are essential data sources for diabetes surveillance. Information from the following surveys is currently used to populate the indicators:

Examples of what can be shown using data from RKI health surveys:

Secondary data are data that were originally collected for another purpose or in order to answer a different research question. They represent another important data source for diabetes surveillance. The following bodies of data are used to populate the indicators:

These data sources enable, for example, the following indicators to be presented at regular intervals and by state:

Diabetes surveillance also uses data from the nationwide diabetes patient documentation (DPV) and from regional epidemiological diabetes registers. The data from these registers play an important role, particularly in the case of the less common types of diabetes such as type 1 diabetes, or type 2 diabetes in children and adolescents. In order to calculate the figures for some indicators, information from official statistics, such as cause of death statistics supplied by the Federal Statistical Office, are also required.